As my family has expanded, so has my storage needs. When I first started out with vehicle dependent travel we were in an SUV.  We used several bags and open top storage bins. I also used some plastic drawers from under my wife and I’s bed we used for linens. The storage was useful, but it needed to be strapped down and was flimsy. Items flew out regularly. It was less than attractive and infuriating at times. We made it work and it was nice to have something that resembled a storage system to hold our belongings in the truck.

After when we switched from the the 80 Series Land Cruiser to the 2017 Toyota Tacoma we put a plastic storage box on top of the cab rack. The box was a rolling tool box we purchased at Home Depot. It worked but, I was constantly needing to ratchet strap the box down. Every time you needed something from the box. You would go through the ritual of: un-rachet, open, close, and re-ratchet.  The items inside stayed dry but getting them in and out was cumbersome.  Not to mention trying to remove the box. The box was nearly as wide as the truck and incredibly heavy when completely filled. You can see it pictured below. 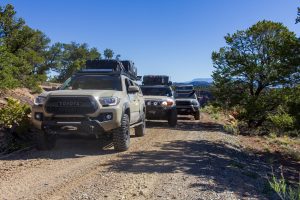 We ran this box for about a year. When we purchased the Habitat, a new solution was a must to replace the rolling tool box. After looking around I found a couple options for aluminum boxes. They were all great choices but I decided to go with what was currently in stock. The company I chose was Zarges.

Zarges was founded in 1933 and located in Germany. They have a great reputation and the products were always mentioned in high regard. 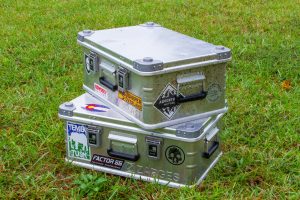 These boxes have been in hard used for 2 years. They have stickers on them and they are bug covered. They sit on the truck in the weather for extended periods of time. There is not one picture of these cases brand new in this review.

The cases are aesthetically appealing. The aluminum wears well. The boxes show little wear even after a couple years of use. 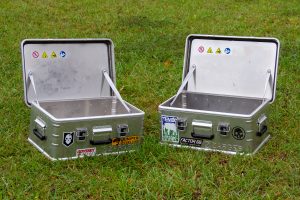 The boxes stack well. They do not stray from their position due to the corner caps. Each cap is held in place with four rivets. 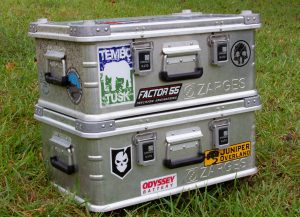 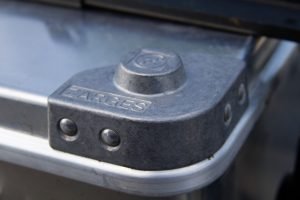 The handles are well thought out. There is a handle on each width end and one handle on the face of the box. When carrying the boxes you can carry them like milk crates or like a suit case. Depending what you put in them you may need one or both handles to carry the load. 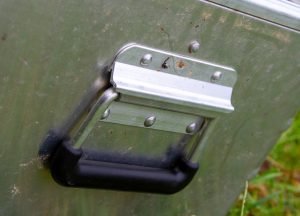 There are two latches on each box to keep the lid evenly closed. The latches are sturdy and hold firmly, but also are easy to open and close. The boxes have the ability to be secured by locks through the bottom of the latches. 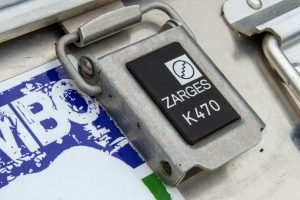 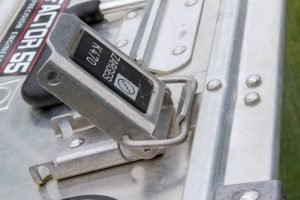 Inside the lid you can see the gasket to keep dust and water from entering the interior. The boxes have never failed me in keeping dust and water out of the box and away from my stored contents. 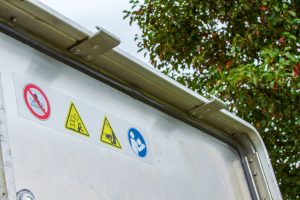 The back of the box you can see a full length piano hinge held by twelve rivets. There are six rivets on each side. 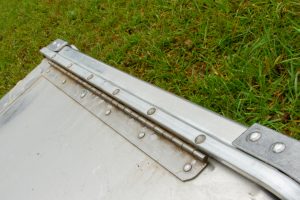 The lid is kept from over extending by a limiting strap. The strap is held by one large rivet on each end. 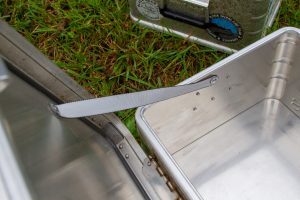 The bottom of the boxes have a raised lip to allow them to stack and to keep them from sitting entirely on the ground. 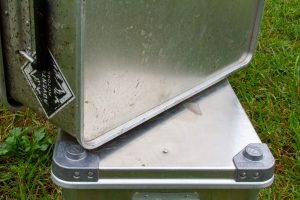 These have been fantastic boxes. They have held up to camp life. Stacking, sitting, stepping, and general use they look no worse for wear. They are light and easy to maneuver above the cab on the rack. As stated I have had no issues with the construction of the boxes. The moving parts (hinges, latches, limiter strap) show no signs of being worn or need of attention.

The boxes I have held in place by utilizing Front Runners Wolf Pack Rack Bracket. The brackets have worked well. They are extremely fast compared to ratchet straps. A single spring pin holds the bracket in place and can be locked. 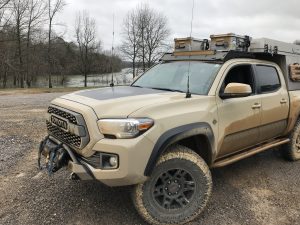 Zarges has made a fine product. I highly recommend them to anyone looking for a waterproof/dust proof storage solutions.